It is a famous line from a famous movie, A Field of Dreams. For anyone who may not know, the movie A Field Dreams is about man who builds a baseball field in the middle of nowhere. And to everyone’s amazement, baseball players he idolized in his youth, show up from the afterlife to play just one more game of baseball. The famous quote has come to mean more than baseball. It means if you want people to come to you, you have to make it happen and build it yourself. Whether it is a blog, a building or in our case, a fire pit you need to create whatever it is, believe in it and eventually people will show up.

In our case, the people who came were teenagers, not baseball players. As a teacher of young children, the last thing I generally want in my house is more children. Not that I don’t love teaching or the kids that I teach. When you spend seven hours a day with them and then go home to two of your own you might understand. My husband is exactly the opposite. He does not work with children and as an only child growing up always dreamed of having more kids around. As we have moved houses and made certain decisions about what to have where or how to renovate that, my husband has been adamant that it would be to our benefit to create a home where our two boys would want to bring their friends to and “hang-out”.

My response to the idea that our home as a place for teenagers has not always been a positive one. Each time my husband shares this idea, I may have rolled my eyes and I may have even complained a little. However, I grew up in a small house. With a big family there was barely enough room for us let along a group of teenagers. I understood this concept of having our kids be able to hang-out at our house as being important and I have forced myself beyond my comfort zone to make it happen. If I can recall, many people in the movie A Field of Dreams thought the man who built the baseball field was crazy too, including his wife or that’s how I want to remember it.

So last year when we were adding a new patio in our backyard, we had the option to add a fire pit. It would cost extra they said. The cost was already expensive so what was another $1K? Well, a lot. When you have two growing teenage boys, you always have to stop and think where you are spending your money. They always seem to need something that costs money and as they get older everything seems to cost more. What was the cost analysis? Would we get enough use out of it? I remembered when my older son first went to Boy Scout sleep-away camp. When I asked him his favorite part he didn’t hesitate when he said it was sitting around the fire at night with the other scouts, talking and sharing stories.

Both of my boys and my Scoutmaster husband have spent many a night camping with other scouts and sitting around the fire, talking and sharing stories. They earned their Fire Chits and learned how to make a fire for survival. They also learned how to be responsible with a fire, as well as enjoy a good fire. During the week of scout camp there is always a night when other family members can visit. The highlight of this night is always the creative and sometimes foolish skits around the final campfire.  I knew if we were to built a fire pit, the boys would have the skills to be mature. I knew they enjoyed a good fire while camping but would they enjoy it in our backyard. I took a leap of faith and I told the company to build it.

In the 21st century, raising a child with a cell phone is no easy task. Trying to avoid buying your child one is even more difficult. As the parent who manages our children’s cell phone usage I feel like I am at war with the technology and my children are their army. I battle for them to detach from their devices to attend to their business at hand. I desperately need for them to engage in the real world, clean their rooms and do their homework. Their phones and the ding of a post on Snapchat distracts them to tending to those chores they view as annoying or unimportant. “Please put the phone down,” I am always saying. I restrict their screen time and they become enraged. They fail a test or even a class one quarter and I take the phone and they are like a canoe without a paddle. Many of us parents are desperate to break our children from this terrible habit. A habit we feel is damaging their generation. As great as the technology is and all the wonderful things it can do, it has a dark side. A dark side of making our children inhuman. It can make our children detached from reality, from real people and real relationships. I am determined to not let that happen.

So, do you remember in the movie when the first baseball player arrived? I believe it was a man by the name of “Shoeless” Joe Jackson. Well, the first group of teenagers arrived at my fire pit last night. Yup, just like that they came. Before Max went to work he mentioned that some of the guys were going to come over and they were going to “hang-out” around the fire pit. “Ok,” I said. He shared that they had tried to sit around a fire the previous weekend at a friend’s house but his parents only had a small chiminea and it didn’t work too well. He told his friends that we had the perfect fire pit and invited them over.

Please know that in my head there were doubts. The house is a mess and they are going to make it messier. My younger son was going to a sleepover and I almost had the house to myself. The dogs always go crazy when the boys have a lot of friends over and it’s so annoying. My husband would be proud of me though because I kept all of those  thoughts to myself. I told Max he could have his friends over and that I would be happy to buy them pizza if they were hungry. Ok, I did text one friend and complain a tiny bit.

It took a little while for the gathering to get started but eventually the fire was burning quite well. I looked out the window and they were all sitting around the fire, eating pizza and talking. Teenage boys who were enjoying each other’s company on a Saturday night. They were safe and they were happy. Their phones were nearby but when I looked out, I didn’t see anyone on their phone. They were looking at the fire and at each other. Luckily my son did have his phone on his because the dog got out and was running around the back yard making a nuisance of himself by barking. I worried the neighbors would be annoyed and asked that he try to wrangle Buddha the pug and put him back in the house. Hopefully the neighbors could see the magic that was happening in my backyard and forgive us.

I was so amazed they came, just like in the movie. I hoped they would but after having the fire pit for a year and they hadn’t used it, I was worried. I was sorry my husband was not here to enjoy what he had long hoped would happen, that one of our children would bring their friends back to our house to “hang-out”. I texted one of the other moms whose son was sitting around the fire. I let her know that they were having a great time and that her hope that her son would engage in the real world with real friends was happening. She knew this but it never hurts to be reminded when something good is happening. As a teacher I am all to well aware that not all kids feel included. They do not always have a core group of friends to hang-out with or depend on.

We are fortunate that both of our boys have friends they have made along the way and the core group for each of them, although adjusts itself with a member here or there, is basically forming. A close knit group of young men who will be there for each other. Who will engage in real life and real relationships. They will spend time together and enjoy experiences like the movies, hiking, haunted corn mazes and sitting around fire pits. They will celebrate their accomplishments and lean on one another when there are disappointments and tragedies.

One day I was at work and I was complaining about having to carpool my two boys to their various activities and the craziness and messiness that my life sometimes is. This very wise mom said to me, “Be careful, some day they will be gone and you will miss it all so much.”  I am so grateful for her words of wisdom. They have allowed me to slow down and appreciate these moments in my boys lives. Not every day but like the one last night, watching my son and his friends sit around the fire pit. I was able to ignore the opening and closing of the sliding glass door five hundred times and the dogs barking because for this moment in time, my son was in my backyard and I could enjoy the moment too. Soon he will be off to college and beyond. I recognize these moments are fleeting and I will do my best to savor each one.

Photo below is of Maximus and his friends on the top of Sleeping Beauty, Lake George, NY 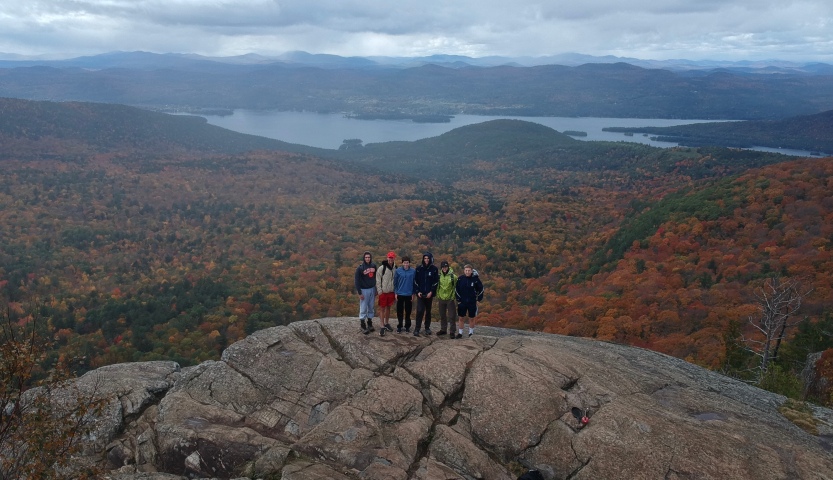